Estelle’s progress in the ESDM 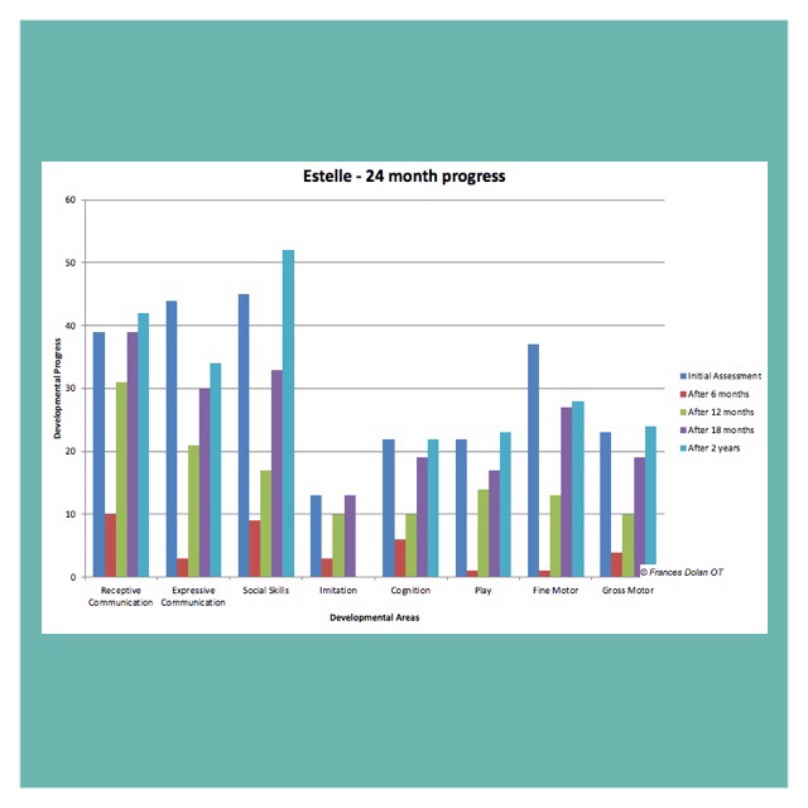 Estelle is one of 1 in 100 people in Australia who have autism. Her parents chose the Early Start Denver Model (ESDM) as her intervention. Let’s look at her fantastic progress.

Estelle is five years old and  lives at home with her parents and younger sister. She loves to get dressed in pink summery dresses. She spends hours playing with her dolls house and drawing. One of her favourite activities is baking cupcakes with her Mum. Estelle has a cheeky sense of humour and spends a lot of time laughing.

Estelle ‘s parents became concerned when she was 18 months old. She wasn’t wasn’t talking and her parents found it hard to interact with her. The first thing they did was visit the GP. The GP reassured them that everything was fine and they left the appointment feeling relieved. The GP said that Estelle would start talking by the time she was 2 years old. Estelle’s parents stopped worrying.

By 2 years of age Estelle was saying a few words. However, she was having huge tantrums that went on for hours. Her Mum noticed that she didn’t play the same way as other children in the playground.  Estelle’s parents were concerned again. This time they decided to go straight to the paediatrician. They discussed all of their concerns and were told, again, that everything was okay. The paediatrician assured them that Estelle would grow out of the tantrums and everything would improve.

For the next 18 months, her parents tried everything to encourage Estelle in her development. They spent long periods of time trying to read her books, but she insisted on holding the books and wouldn’t let them look at the pictures. Her parents tried to go to the park where she could play with other children but this ended in a massive tantrum if she didn’t get hot chips from the same cafe every time. They bought her pretty dresses because but Estelle wanted to wear the same dress everyday. If that dress wasn’t clean each morning, there was a meltdown and Estelle refused to leave the house. Mum washed it for her every evening to make sure it was ready for her. Her little sister was born during the time but Estelle  showed little interest in the baby.

When Estelle started preschool at the age of 3 years, the staff had a talk to the parents and expressed their concerns. They said they had noticed that Estelle :

Once again they went to the doctor. This time they saw an experienced developmental paediatrician. He did an assessment and confirmed what Estelle’s parents already suspected. Their daughter did have a developmental delay, What they didn’t expect, despite all their research, was that Estelle had autism.

What happened after diagnosis

Even though Estelle ‘s parents has been concerned about her for some time, the diagnosis of autism came as a huge shock. They were expecting a diagnosis of language delay, but not autism. Not only were the parents dealing with the diagnosis of autism, they were devastated at the 18 months of ‘lost’ early intervention. They knew that early identification and early intervention makes a significant difference to each child’s progress. They lost this ‘early’ time because they were told that their daughter would grow out the tantrums and catch up to her peers.

After seeing the paediatrician, Estelle ‘s parents decided that they would take the Christmas and New Year period off before starting intervention. The family went to Queensland for 2 weeks. There, the parents talked about what they would do for the next 6 months.

The paediatrician recommended that the family look at a number of early intervention options. The parents were looking for Speech Pathology and Occupational Therapy.  During discussion with a number of therapists they become aware of the Early Start Denver Model, or the ESDM. After much thought and consideration, they chose the ESDM for Estelle.

Estelle made fast progress in the ESDM. She began to talk more and started playing with a much wider variety of toys. She learned to follow more instructions and started answering questions. Estelle discovered dolls houses and was able to play independently at home. Estelle learned to play with her little sister.

Some behavioural issues continued. Clothing was a big problem. Estelle wanted to wear her summer dresses all year round – including the middle of winter! Positive behaviour strategies helped her learn to wear winter clothes.

When Estelle’s younger sister was 18 months old, she showed some early signs of autism. This time her parents didn’t wait and she started the ESDM straight away. Estelle’s little sister did 12 months of early intervention and was assessed at 2.5 years of age. Although she has features of autism, they had reduced and she was not diagnosed with autism. Estelle’s little sister is continuing with Speech Pathology because she has a speech and language delay.

Where is she now?

Estelle started school this year. Her parents wanted her to go to the local public school. However, on the advice of Estelle’s team of therapists and day care workers, they applied for a support class. When she was offered a place in a local support class, her parents quickly accepted the position. Estelle is in a class of 6 children. There is a teacher and a teacher’s aide in the classroom. Their classroom is in a seperate part of the school but they play with all the other children during recess and lunchtime. The students in the support classes have a small area of the playground that is just for them. They can choose to play here if the big playground is too noisy or overwhelming.

Estelle has thrived at school! She is learning to read and write. She has made 2 friends and loves school. Her Mum worked very hard to help her put her school uniform on every day. Now, she gets dressed every morning in her school uniform but she doesn’t like her school shoes.

Estelle is staying in her support class for another year. The school will transition her to some lessons in the mainstream class next year. If everything goes well, she will move to the local public school that her parents originally wanted her to attend. She will start there the same year that her younger sister starts school.

Estelle has completed the ESDM curriculum. She is continuing with Speech Pathology and Occupational Therapy to:

Her parents are thrilled with her progress and are feeling very confident about her future. They were grateful for the fantastic start she had to school this year. Her parents believe that the ESDM laid the foundation for starting school and learning to make friends. They know that they will have to research the best high school for her. However, they would not hesitate to start in a support class and transition when Estelle is ready.

What is their one piece of advice?

“If you are worried about your child, go to a very experienced paediatrician. If necessary, get a second opinion straight away”.

Stay tuned weekly stories from other families as they journey through autism and the ESDM.

OneOnOne Children’s Therapy is located in Bondi Junction in Sydney. Our team of Certified ESDM Therapists, Speech Pathologists, Occupational Therapists and Psychologists train to the highest levels of fidelity so we can improve children’s lives. If you want to find out more about the ESDM, then call our clinic on (02) 80657837 or email us.